MBS Agent for Windows enables you to automatically perform pre- and post-actions when executing backup plans. In other words, you can execute any command prior to and right after the plan commences. The list of actions ranges from syncing your account to executing another backup plan — it's really up to you! In truth, these actions are nothing but a script that is executed in the background. In this article we illustrate how to set up such actions by the example of a sample script.

Prior to amending backup plans with scripts, these scripts naturally have to be written. The MBS Agent for Windows supports the following executables: .exe, .com, .bat, .cmd, .pif. For this tutorial, we have prepared a simple .cmd script that performs repository synchronization prior to executing the backup plan.

As you can see, the script consists of only 2 commands — changing the directory and triggering repository synchronization for Cloud Account. Needless to say, commands that concern our product have a special syntax. To learn more, refer to Using Command Line Interface chapter.

To set up pre- and post-actions, go ahead and launch the MBS Agent for Windows. Create a new backup plan by pressing or edit an existing plan.

The Backup Plan Wizard will start. Proceed to the step that prompts you to specify your pre- and post-actions. Select the Execute this command before backup runs or Execute the command after backup completes checkbox (or both). Then specify the path for the executable(s). Finally, indicate if the plan should continue or terminate in case the command failes to execute. 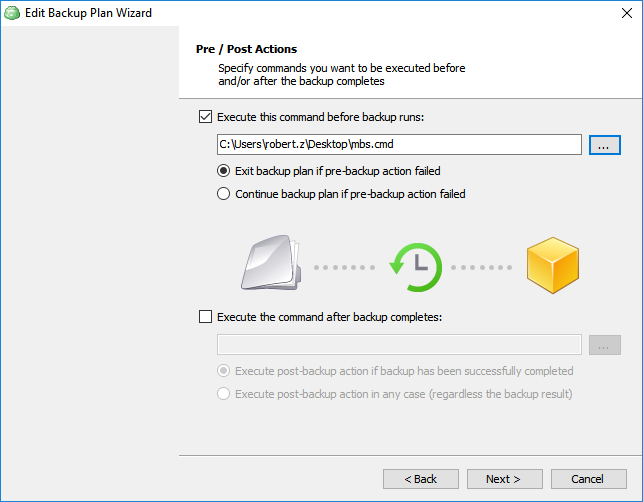 Having set up the plan, start it. Immediately you'll see a status message above the progress bar indicating that the pre-backup action is being executed.